The MCHS Tigerettes stomped the Beech Buccaneers Saturday, September 21st in a home game. The fist half was slow to start, but Macon’s efforts paid off. The Tigerettes scored first with solid defensive pressure and nice passes back into the scoring zone. Keeley carter scored a sniper-shot to far-corner of the net.

Jamie Ashburn scored the second goal of the evening with just 6 minutes left in the 1st half. The Tigerettes maintain their lead in the 2nd half with a third goal despite a goal earned from the Buccaneers. Keeley Carter captures the Hat Trick–another sniper shot to the far right corner of the net from about 25 yards away. The Tigerettes showed tremendous defense and team work as they set up that shot.

The Tigerettes walk away with a victory, final score 4-1! Great job, Tigerettes! 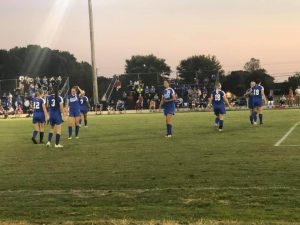