The Tigerettes came out roaring in set one and kept the lead for most of the match. The Bobcats tried to keep up, but the Tigerettes played to win with a final set score of 25-15.

In the second set, the Bobcats played harder keeping the score tied up. Set two was an intense match of back and forth, but as the Bobcats closed the gap of 24-21 to a tied game of 24-24, the Tigerettes stepped up and knocked out two more points winning set two 26-24.

Last night was also the Volleyball Team’s Senior Night. As they closed out their regular season, they honored Seniors Mattie Butler, Mia Brawner, and Skylar Davis. Congratulations ladies on your athletic success. Macon County is proud of you! 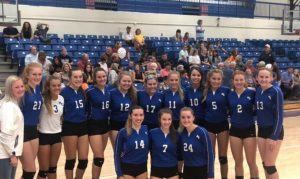 Good luck to our Tigerettes as they enter the District Tournament next week in Portland.